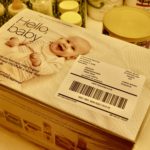 One month before giving birth, I received a “gift box” from the formula milk company Enfamil. Inside the box were formula and nipple samples, and a card with my name and parenting support information (which actually leads to an industry-sponsored helpline) on it.

I was shocked that the formula company knew that I was going to give birth in one month, because we didn’t make any pregnancy announcement. But according to a new WHO/UNICEF report, my experience is only typical: 51% of parents said that they have been targeted with this kind of predatory marketing from formula milk companies.

In fact, the experience could very well serve as an illustration for the WHO/UNICEF report, which found that formula milk marketing is pervasive, personalized, and powerful. The parcel was sent directly to me, with my name on it, and congratulated me for my new baby.

WHO also found that the industry uses manipulative marketing tactics that exploit parents’ anxieties and aspirations. The card came with my parcel labeled an industry-sponsored helpline as “parenting support hotline,” and when I called (I actually did!) I got the information about how to ask for formula samples from the hospital when giving birth.

The package of the parcel also contains misleading information, including “Enfamil PREMIUM is closer than ever to breast milk,” “Enfamil PREMIUM is the only formula that has both the amount of brain-nourishing inositol and DHA that breastfed babies receive.” The messages were accompanied by a photo of a beautiful and chubby baby, well-fed and smiling.

This, according to WHO and UNICEF, is exploitative marketing of formula milk. This kind of marketing from formula milk companies focus on getting targeted parents to use their products, instead of supporting lactation or use of human milk. It influences parents’ decisions on infant feeding, and can have profound and lifelong impacts on children’s health and development.

The formula industry is now worth $55 billion every year. While the industry puts profits before infant health, we can put babies before bottom lines, starting with recognizing the harmful effect of aggressive marketing and joining WHO’s effort to end exploitative marketing.