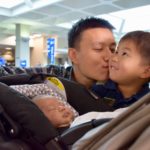 In a 2019 piece for Family Values at Work, my husband shared his thoughts about the need for paid family leave for men. Since then, we’ve seen some changes—the Biden administration’s social spending bill, which includes a provision for four weeks of paid family and medical leave—not exactly robust but better than nothing—passed the house narrowly last November. But to this day, the fate of the bill in the Senate isn’t certain.

My husband was lucky. He had six weeks of paid leave, which allowed him to really learn how to be a dad in a practical way and to really bond with our children. Having him around during that period of time greatly helped me to build a successful breastfeeding relationship with our baby. I also feel that our partnership was strengthened when we had time to learn to parent together.

As beneficial as paid leave is, only 16% of employees in America have access to some paid family leave through private-sector paid employers. What happened to those men who didn’t, or who had very short breaks? Chris Osterlund, a 32-year-old new dad who lives in Virginia, shared his experience with New York Times, saying that when his son was born, he took only two weeks and that the company he worked for at the time was not supportive of dads taking longer leaves. The sleep deprivation of a new baby made it difficult for him to function, and it led to disengagement at his job and tension with his spouse. “I never felt like I had the buoyancy to think clearly about how to change what became a dark period in our marriage,” he told the Times, “Whatever the reason, I regret not being home and have carried that shame for almost three years.”

Unfortunately, some dads don’t take leave even if they have access to it, because they think they’ll be “punished.” The caution wasn’t irrational: studies did show that taking paternity leave can damage a man’s professional reputation and affect his future earning potential.  And for more dad to take parental leave without being punished, it needs to be universal. It’s time for dad, not just moms, to start shouting for paid family leave.