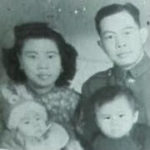 I once knew a woman who breastfeed on a refugee boat for 48 hours and saved her two young children’s lives—yes, saved their lives, not kept them alive. It was during the 1949’s Chinese Civil War, and that was a small boat packed with displaced people. Her fellow refugees were afraid that the kids’ crying would attract the Communist Navy searching for fugitives on the sea, and were going to throw the children off board. The woman saved her children by calming them with her breasts.

The woman was my grandmother. The two children were my then 3-year-old father and 1-year-old uncle. My grandmother did such a brave thing, but she was not proud. Until the day she passed away, she still associated breastfeeding with war, violence, oppression and other traumatized experiences. On the other hand, she viewed infant formula as a symbol of freedom, progress and wealth. Upon the family’s arrival in Taiwan, my grandmother got herself a full-time desk job, a rare thing for women of her time. She used the money to buy expensive formula milk, and proudly formula fed all my father’s younger siblings.

I shared this family story at a recent HealthConnect One panel discussion about lactation practice within immigrant communities. Of course, this is just my grandmother’s story, and her experience can certainly not represent all immigrants’ experiences. What I was trying to say is that immigrants came to our country from all over the world, and many of them have undergone things that were hard for us to imagine. When working with immigrant communities, we need more than knowledge and education.

Knowledge is good, but empathy is better. Judging a woman like my grandmother with knowledge, it is easy for us to say “oh well, she WANTS to formula feed”—even herself believed that formula feeding was her personal choice. Which is real but not true. Decisions about health are rarely voluntary. We think that our decisions are voluntary, but there is often baggage behind that “voluntary decision.” We can never understand an immigrant mother’s baggage until we climb into her skin and walk around in it.

As health and community workers, we need to develop empathy, respect, and understanding for immigrants by considering situations from their perspectives. And then we need to show up in the community, prepare to support them instead of just educating them. Only when we are ready to support communities with empathy, can we start to promote lactation across borders.