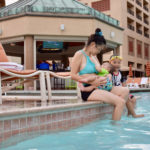 A while ago my 6-year-old and his best friend talked about if chocolate milk comes from “special black cow” at a playdate. The conversation just made me and the other mother laugh. And then, randomly, I told the other mom, “you know there is actually a documentary called ‘chocolate milk.’ It is about breastfeeding disparities in black moms.”

I was speechless with an indescribable emotion. After a moment of silence, I said, “Well, actually black mothers have the lowest breastfeeding rate.”

“How could that be?” She questioned, “I used formula. It’s super expensive. It may be a stereotype but I think many black moms cannot afford it. So don’t they just breastfeed? Breastfeeding is easy and cheap.”

Once again I was speechless. That statement was just so wrong in so many ways.

Breastfeeding is only “cheap and easy” when everything goes 100 percent smooth. Breast milk has a cost, direct and indirect. Directly there is breastfeeding-related products and services. Indirectly there is an impact of breastfeeding on a woman’s future earnings. A British paper found that women who nurse their children longer are less likely to come back to work within a year after giving birth and that breastfeeding-friendly corporate policies, such as on-site daycare and pumping rooms, increase the likelihood of coming back to work while breastfeeding, but only for the better-educated women.

So mothers actually formula feed because they cannot afford the cost of breastfeeding. According to 2017 CDC data, breastfeeding initiation rates are much higher in higher-income, largely white communities. In fact, according to a study in Breastfeeding Medicine, mothers with lower rates of breastfeeding “tend to be young, low-income, African American, unmarried, less educated, participants in the Supplemental Nutrition Program for Women, Infants, and Children (WIC)…and more likely to report their pregnancy was unintended.”