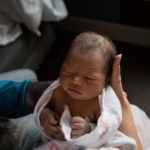 Exciting news for Californian parents—Governor Gavin Newsom announced that he hopes to expand paid family leave to six months in California! Here at San Diego County Breastfeeding Coalition, we are happy to start the new year with needed attention given to the dilemma faced by new parents when forced to choose between paycheck and providing optimal bonding for their child(ren).

“This is a necessity–we all know that the first few months are so important for bonding, attachment, and development of a newborn, not to mention it is a crucial time for mothers to establish breastfeeding during the initial weeks. Families should be able to spend this time with their baby instead of worrying about having to rush back to work,” said Nancy Saavedra, MPH, CLE, the current president of San Diego County Breastfeeding Coalition.

The plan, part of our governor’s $209 billion budget plan, would compensate new parents up to 70 percent of their wage when they take off to care for a newborn or newly adopted baby. Two parents or caretakers would be allowed to take advantage of the program for up to three months each.

It’s a major upgrade to the state’s current paid family leave policy, which provides up to only six weeks of partial pay for employees as part of the state’s Disability Insurance and Paid Family Leave Program.

I have firsthand experience on the importance of paid family leave for diverse families. I took advantage of the current paid family leave after my first child was born. During the six weeks, I bonded with my baby by breastfeeding him as often and as long as possible; I also built a very good milk supply. By the time I went back to work, I had more than one gallon of breast milk stored in my freezer. With that storage, I was able to continue exclusively breastfeeding even facing challenge related to pumping at work.

I also have firsthand experience on why we need an even longer paid family leave. On the day my second child turned 6 weeks old, both my husband and I went back to work under the current paid leave policy. My husband immediately flew to Asia for a week-long business trip. That was a miserable week for our family. At that time, the baby still eats every two to three hours, and sleeps only a few hours at a time, day or night. Breastfeeding became much harder when my partner was not around to help.

Even with the exciting proposal in works, as CNN reported, the United States is still behind what is offered by most developed nations around the world. And we are lucky to live in California, as most states don’t even have the protections and benefits that we are entitled here. The United States is the only developed country in the world that doesn’t guarantee paid time off to new parents. In fact, according to data compiled by the Organization for Economic Cooperation and Development (OECD), the U.S. is the only country among 41 nations that does not mandate any paid leave for new parents.

Still, we are excited about the Governor’s proposal—As they say, baby steps. San Diego County Breastfeeding Coalition is committed to continuing the fight for working families’ rights and support for breastfeeding families. We thank Governor Newsom for looking for bold solutions and recognizing the need for California families to have adequate time to care.