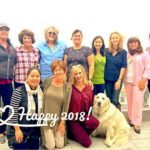 It has been a busy year for breastfeeding advocates!

You and many others have sponsored our important work here at San Diego County Breastfeeding Coalition and together saw renewed enthusiasm and commitment in 2018. With everyone’s help, we continue to create a landscape of breastfeeding support across the county.

Read on to refresh your memory about what you made possible this year. It is your engagement and action that has made all of this happen:

That is just a snapshot! Before the year closes, let us thank you for helping make this important work possible!